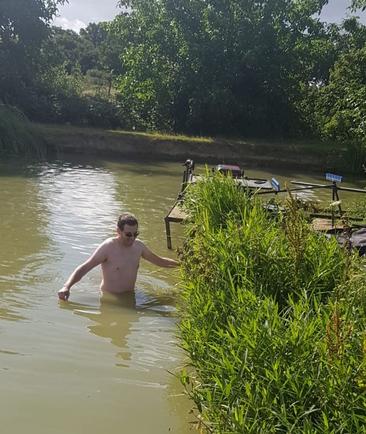 Matches under the new normal

What a period in history it has been and will be for the foreseeable future. Having sadly lost one of our own, Bobby Stone, to the dreaded Coronavirus, brought the seriousness of the pandemic close to home. Nevertheless, we were very lucky that Angling was one of the first activities to be allowed in the lock-down relaxation and through the efforts of the Angling Trust, matches shortly followed, despite the necessity for gathering. See (Click here for full information).

Lockdown led to cancellation of our first few matches, but they have resumed on a limited basis from 7th June 2020. Unfortunately, the requirement for social distancing does mean pegs must be further spread than usual, leading to limits on the numbers who can attend. Matches must be booked in advance with preference given to those members with highest attendance records last year and then randomly drawn from other interested members.

Some venues have also cancelled our long-standing bookings in favour of a newly invigorated interest in day tickets, so fixtures are subject to change at short notice. Members should watch their emails for updates.

The Committee recognises that this will lead to some disappointment but hopefully will not last too long. As the competitions are not open to all members, this year's championship and trophies have been shelved, but the match programme continues for pools only on the day.

With the owner insisting on reserving much of the lake for day-tickets, we were limited to just 20 for this popular venue, allocated part of the car park bank, the spit and a few pegs into the far side. It was great to see plenty of masks & social distancing taking place although some had to work hard to resist their customary boy hugs and inappropriate touching. Specially sourced 2 metre draw table and weigh cradles completed the precautions and the arrangements were well respected and observed. Thanks to all for keeping each other safe.

The fish were obliging as they usually are at Orchard and some big names featured in the results. None bigger of course than Graham Stevens who seemed back on form after a quiet season last year. He ran out overall winner from the first peg on far side of the spit with 172lb 07oz. He took a few scalps in the process relegating Mike Brewster to 2nd overall with 166lb 15oz, and Sam Docker pushed back to 3rd with 153lb 14oz who both had decent pegs either side of the spit. John Mills was 4th overall, also from the spit section with 137lb 4oz.

Josh Donovan was 2nd on the other section with 128lb 15oz and Paul Oliver 3rd with 92lb.

Decent weights all round as usual and great to be back on the matches again.

Professionals lead the way at Monks​

Again only 20 pegs available for this one and with the water level way down, the fishing was a bit patchy.

Not for venue expert Sam Docker though. Although he drew what he claimed was a rubbish peg 38, it didn't turn out to be much of a leveller as he romped to victory with 125lb 7oz. John Mills was equally miffed at drawing peg 2 and although some way behind, still managed a creditable 2nd with 87lb 2oz.

It was close after that though with Ian Carley 3rd overall with 78lb 12oz and Josh Donovan 4th with 75lb 8oz. Mike Brewster was 3rd in the high numbers section with 75lb 4oz and Craig Winchester 3rd in the low numbers with 70lb 10oz.

If we could find a way of nobbling the Mills/Docker combo, we might have some closer matches. More rivers perhaps....

Another limit of 20 saw many disappointed this week for this ever popular venue. However, with it constantly fully-booked for day tickets since re-opening, there were some doubts about how well it might fish. We needn't have worried as it fished pretty well and ended up a very close contest after hours of weighing in!

Once again Sam Docker was not impressed by the new 'raffle style' draw as it resulted in a peg on the far side at the top end of the furthest island, one which even had him thinking about going home. Nevertheless, despite very little in the first hour or so, he did what he does best to come out on top with 183lb 1oz of Sumners lumps. Very close behind was Mike Brewster from between the islands on the near bank with 179lb 2oz for 2nd place. 3rd overall went to Ian Carley with 153lb 3oz from the next peg to Mike and 4th was Phil Harris from the unfancied top end with 150lb 10oz.

The match was divided into 3 sections, one of which was the far side of the bowl. Whether the fish weren't there or whether it was just the quality of the anglers in the section, is difficult to say, but none of the overall places came from this section. However, Mark Merrett was 1st on the section, finding smelly frozen prawns were not to the Roachs' liking but hoovered up by the carp and weighed 92lb 4oz. Paul Oliver was 2nd in the section with 82lb 3oz.

​Back to Monks for extra pegs

With Willinghurst unable to host enough pegs, we were luckily able to switch to Monks and the larger and more prolific lake 2, where we could accommodate 25 pegs. Once again, most of us were fodder for the venue masters, but it is still a price worth paying for the opportunity to get out when so many other activities are still curtailed.

Conditions were tricky however, with a very strong gusty wind proving a nightmare for any loose tackle. Talking of loose tackle, first victim of the wind was Dave Morris who saw his pole sections blow in whilst setting up. Being tight and also with nothing else to fish with, he had no hesitation in getting down to his skiddies to go in after it for a successful rescue from the fortunately warm water. Worryingly however was that once retrieved, he disrobed form his wet Y fronts completely. Not discreetly by facing the deserted bank in front of him, but insisted on displaying his nakedness to all pegged on the nearside bowl. Thanks Dave, we can't un-see that.

As for the match, it was the big guns again. (As exclusively and uncannily predicted by Micky Biles). Top spot this time went to John Mills on peg 69 where he banged out a magnificent 229lb 11oz. That's approximately one 7lb fish every 10 minutes. 2nd was Phil Harris, drawn on fancied peg 55, where despite facing the teeth of the wind managed 156lb 12oz for 2nd place, and after being knocked back for one of his nets. 3rd went to Josh Donovan, close behind with 151lb 9oz and 4th to Sam Docker with 141lb 8oz.