Despite the heavy rain earlier in the week, there was little flow on the river but still a bit of colour so everyone looked forward to an enjoyable day.

It proved a much closer affair than last year but by just four points Warlingham retained the trophy for the fourth year in succession. Not only that, but we again had the individual overall winner in the shape of Bobby Stone who had a remarkable catch of Roach plus one Bream for 17lb taken from the top end of the new section at Hever. A brilliant result for Bobby and the team.  Well done all!

There was a bit of difficulty in compiling all the results at the car park, so unfortunately some people had drifted off before the usual team and trophy photos were taken, but below is individual winner Bobby Stone clutching his imaginary trophy and a smile he will be wearing for weeks.

Courtesy of David Adby, there is also a clear compilation of the final results. (Click on the pictures for full size)

The run of success had to come to an end sometime and this was it. Our only section win was for Mark Merrett who did well to win the top Broad A section from the weir and Steve Longhurst and Hugh Blake who were second their sections. Other than that, it was mediocrity for the rest resulting in W&DAS finishing 3rd on the day.

​Holland Angling Society recorded their first win overall in some time, so many congratulations go to them.

Just three teams again this year, but always competitive nonetheless, particularly with Holland and Edenbridge being on their 'home' waters.  A little bit of rain during the week had given the river some colour, but still very little flow. The morning rains that were forecast, happily failed to materialise and the weather was a warm 15c, so conditions looked pretty good. However, the planets were definitely aligned for us this year as W&DAS anglers took the top four individual places and the team match by a mile.

It was Eden Challenge virgin, Keith Harper, only just dried out from his total immersion in Campbell Lake at Viaduct two days earlier that led the way. From the top end of Mill Farm he managed one decent bream plus over 300 'bits' for a magnificent winning total of 16lb 15oz. 2nd place went to Jasper Stevens with 12lb 4oz from the same section. Another 'Eden Challenge virgin', Bradley Garner did well to land a carp and a big tench plus a few bits from the lower Mill Farm section to take 3rd with 11lb 3oz and Scottie Denton completed the clean sweep by taking 4th with 9lb 1oz from the first section of Broad A.

There was good backup from the rest of the team with Craig Winchester and Steve Longhurst winning their sections and no lasts from anyone.

Fantastic result that will be hard to ever surpass.

Less than ideal condition for this year’s Challenge with a fair amount of rain falling late in the week the river was already carrying flood water and expected to rise during the day. Following a captains inspection it was agreed unanimously that the River Eden was safe and fishable, so the event would proceed.

The river did as expected through the day, rising around 12 inches during the match, making already tough fishing conditions even more so in many pegs. None more so then for Viaduct Champion 2019, Micky Biles, who even though his peg was verging on impossible to fish, causing him to break his feeder rod, he also lost bonus fish but through all the ensuing carnage, still manage to carry on his impressive run of form by producing another stellar performance landing 3 Bream for his overall winning weight of 12lb 8oz. Very well done Micky on his 2nd Eden Challenge win.

Graham Stevens won his section at Haxted, which once again proved to be the most disappointing area overall and as he seems to spend most years fishing here, deserves some appreciation for his dedication to the team. Unfortunately this was Warlingham’s only other real highlight.

The team match itself though proved to be one of the closest in many years and after the hosting club Holland had checked through all the results 3 times, the results were announced with Warlingham finishing last of the bunch. Well done to Holland taking the shield with 43 points, Edenbridge second with 42 and ourselves on 41.

Finally on a personal note, can I thank the two members, Andy & Sam, who stepped up in the last few days to allow us to fish with a full squad. We’ve not previously struggled to put a team together for this competition and I hope this is just a blip, but looking at the general lack is interest in all natural venues within the match group I wonder if this may be the being of the end of our participation in this competition also?

Eden Challenge 2017 - A match of Highs and Lows

With CALPAC unable to field a team this year, the match was reduced to just three teams, Edenbridge, Holland and W&DAS. Still, it was a beautiful Autumn day although the river was low with little real flow.

It produced some stellar individual performances from the W&DAS team, but a lack of consistency failed to produce the desired team result with Holland taking the team honours again this year. However, there were astonishing results in the individual competition with a dead-heat for 1st place between our own Micky Biles and Steve Longhurst, both recording 11lb 4oz. Micky was in an un-noted peg at the bottom end of Broad A but managed to pick up a late Bream around 4lb to boost his already decent net of bits. Steve meanwhile was at Hever where he caught a couple of bream and some bits for his total, although managed to lose a couple of bream as well.

To complete the success in the individuals, Craig Winchester managed 9lb 9oz for 4th overall from the top end of Mill Farm, which included an early caught tench around 4lb but which sadly did not seem to have any mates.

With last year's event called off due to the Covid crisis, Edenbridge were determined to resurrect the event this year. Despite problems like not being able to use the Broad A section and the river still being in flood, by putting one section on Hever Castle Lake itself, 36 pegs were eventually cobbled together. Still, it had stopped raining and it was a decent dry Autumn day.

Very well done to Craig Winchester who somehow has inherited the job of W&DAS nominee and which meant this year we (he) was also on the rotation to run the match as well as picking the W&DAS team. No easy task!

Finding 12 to fish was not tricky and he ended up scraping the bottom of the barrel to persuade Sam Docker to make up the numbers. Sam repaid the favour of course by drawing everyone's favourite section on the wides at Hever where he managed to snag four decent bream and a few bits to become Eden Challenge Champion overall and to stand in the mighty shoes of Micky Biles. Born and brought up on the river, it took Steve Longhurst 35 years to manage his first win in 2017, this was just Sam's 2nd attempt - more used to baits bigger than many of the fish he caught.

Despite Section honours from Graham Stevens, Steve Longhurst, Bradley Garner & Paul Oliver (also 4th overall), there was not enough consistency elsewhere and team honours went to Edenbridge for the first time in years. 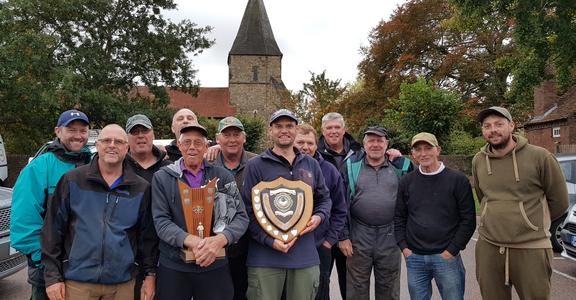