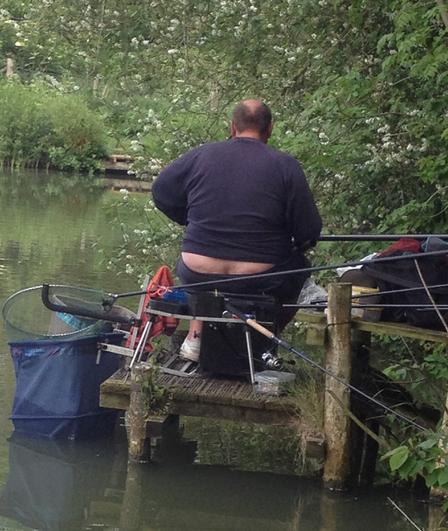 What a cracking fishery and Road Trip this turned out to be......

This was a first visit for most of us to this beautiful fishery which nestles in a steep valley in the heart of the Somerset countryside. Picked entirely upon its reputation for quality fishing, what a great choice it was and big thanks to Lucky John Palmer for arranging things once again for the 15 who made the trip.

There are six lakes in total at Viaduct and this meant we could sample three of them over the three days.

After a Little Chef Olympic breakfast en route, we arrived around 9.00 on a bright & sunny day, for a draw on so called 'Scary' Cary lake, fishing 11.00 till 5.00. It is called 'Scary Cary' after its reputation for the sheer number and huge average size of carp that inhabit it. No hole in the ground this one. Like all the lakes, it is mature with plenty of cover and snags which made the prospect of landing these lumps all the more daunting.

It was Bobby Stone who registered first blood with a decent double picked up on the bomb, only to see it rip through a small hole in his landing net and back in the water. After a hasty repair, he did manage to get the next into the keepnet, only for the third to make a new hole and again drop back in the water. Nobody laughed - promise.....

Meanwhile, going about his business up at the top end of the lake was Gary Clifford who openly admitted his peg was 'solid' and managed to land enough of the lumps on pole and meat for a Day 1 winning total of 115lb 15oz. Dave Hughes had gone down a couple of days early for a sneaky practice and put that to good effect by switching methods to keep the fish coming. With some on the pellet waggler, some on the long pole with paste and a couple from the margins, he managed 95lb 7oz for 2nd. Paul Oliver suffered a couple of tackle failures from a dodgy pack of Preston Hooks but after buying some more from the on-site shop nabbed a few lumps on the feeder plus a few more down the edge for 85lb 2oz and 3rd on Day 1.

The evening was spent in the Brewers Fayre adjoining the Premier Inn where far too much food and drink was consumed as usual and Bobby Stone cleaning up with the cards.

Pegged on Spring Lake this time, this lake is allegedly dominated by silvers and just the occasional very large carp. However, it was a bright and hot day and on arrival at the lake, the surface was almost black with carp basking in the sunshine. This created something of a dilemma for those planning to go silver bashing and most succumbed to trying for carp - at least to start with, although it quickly became apparent that they were not really that interested.

On lighter pole gear, most quickly started to pick up fish but it was difficult to keep the decent bream coming and even the smaller skimmers seemed to move in and out. Plus of course, the odd carp that was feeding put in an appearance but mostly disappeared across the lake until the light elastics or line duly snapped.

Pegged together in the shade behind the island were Dave Hughes and Lucky John Palmer. Dave did manage to find a few carp on the pole or bomb and by adding a few silvers did manage a Day 2 win with 66lb 10oz. Lucky John meanwhile thought he was still at Bury Hill and kept the decent bream coming regularly and hang onto one lucky rogue carp to finish close behind on 61lb exactly.

Graham Stevens could not resist the attraction of the overhanging trees of the island opposite so duly chucked a feeder at it. This resulted in alternating between carp and bream which came regularly, giving him 3rd on the day with 51lb 12oz.

Once again in the pub, Micky Biles was without a win at cards only adding his the misery of running last overall in the fishing and the truly relentless ribbing he was getting as a result.  By the end of the evening every staff member in the place and many of the other customers knew his name and that he was stone last.

For the benefit of any of the staff who were not working the previous night, over breakfast Lucky John ensured that the banter continued in case they wanted to know who was in last place. Then it was off to fish the match-only and hugely prolific Campbell Lake.

As another warm day ensued, it was plain to see on arrival, that the carp had broken into a sex frenzy overnight and were thrashing around all over the lake. It was reported that the regular open the day before was "only" won with 200lb odd, so expectations were a bit mixed about the prospects. We needn't have worried as Lucky John was into a carp before most of us had finished cupping in. Fishing tight to the reedy margins amongst the still spawning shoals, there were clearly enough celibate fish to keep Lucky busy throughout the day.

Brian Beacroft meanwhile decided to take advantage of the warm weather with a pre-match dip in the lake to retrieve his errant top section only to take a second swim shortly after the match started after throwing his glasses in. The sight of Brian emerging serenly from the water in his wet boxers was almost too much for some. Not quite Daniel Craig...

Anyhow, whilst Lucky continued to plunder the marginal carp, it became clear that this was going to be a close one, at least amongst those pegged at the bottom half of the Lake, with Jasper Stevens, Barry Stagg, Dave Hughes and Paul Oliver all catching regularly. In the end Lucky John just managed to do enough to win with 136lb 3oz. Jasper stuck to fishing tight to the margins of a small outcrop mostly with cat meat and finish one fish behind for 2nd with 130lb 13oz. For Barry Stagg, the time he spent retrieving his top kit after a plucky carp pulled it off the end of his pole and shot off to the other side of the lake, may have made all the difference as he finished third with another bag of margin-caught carp of 129lb 13oz.

Consistency is the name of the game with this type of format and it was Dave Hughes who proved the most consistent to come out winner over the three days with and aggregate of  288lb. Paul Oliver was 2nd with 239lb and Barry Stagg 3rd with 223lb. A poor first day cost Lucky John honours in the overall but he did manage to win the silvers-only prize over the three days with 58lb with Dave Hughes 2nd with 53lb.

The bailiffs at Viaduct organise the weigh-ins so there is not much opportunity for photos as it is over so quick, but below are a couple of pictures of Dale Smith and Dave King, together with the full results. Just click on the pictures to enlarge.

All in all, a great three days and despite a better showing on Day 3, Micky Biles was still last overall. Maybe next time Micky?

What more to be said except Viaduct proved a really great crack!