After 20 years of keeping the Committee in line as General Secretary of W&DAS, Alan has regrettably had to step down to become a full-time carer for his ageing mum. We thank you for your dedication and efforts on behalf our members over such a long time and wish you well for the future.

Terri McNally has agreed to step up in the meantime to look after the shop pending election at the next AGM. 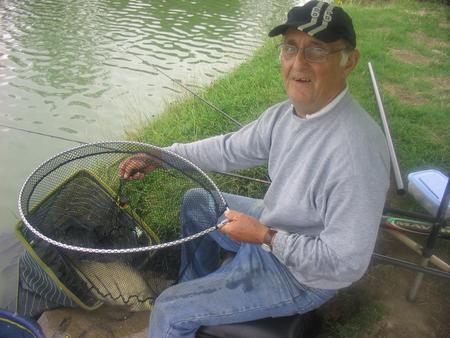 ​Dave Harper has been reading Steve Gardener's new biography of his life in Match Fishing and points out that there are a few references and embarrassing pictures relating to W&DAS from back in the last century. Copies can be obtained from http://www.calmproductions.com/

It is with great sadness that we have to announce the sad death of Terry today, 25th October 2021.

He was a very long standing member and although has been too ill to come out with the Club for some years, he will still be remembered with fondness by many. He more than held his own in many a club match back in the day.

He suffered from dementia for some time and has been in a care home for the last year or so and struggling. It is scant consolation for the family, but at least his suffering is at an end. A reminder to us all that we never know how many fishing days we have left, so make the most of them!

Our condolences go to Steve, Kevin and rest of the family at this difficult time.

In April 2016, W&DAS members Craig Winchester, Andy Tickner & Paul Oliver made the journey to Jurassic Mountain Fishing Resort in Thailand and enjoyed spectacular sport. Below are just a sample of the fish caught over the four days. (Click on the pictures to enlarge)

The resort also produces a world-wide newsletter each month which is an interesting and enjoyable read. The May 2016 edition can be downloaded here. 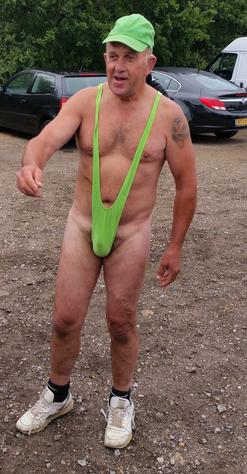 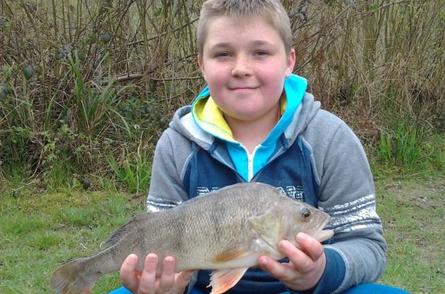 Many congratulations to W&DAS junior member Sam Tidmarsh for making the final this month with this brilliant 1lb 10oz Perch caught at Woodpeckers on a prawn. It was part of a much bigger catch of skimmers and carp and earns him a Sky Sports Goody Bag.

Great to see one of our own members up there, especially with a catch from one of our adopted waters.

Keep it up Sam! 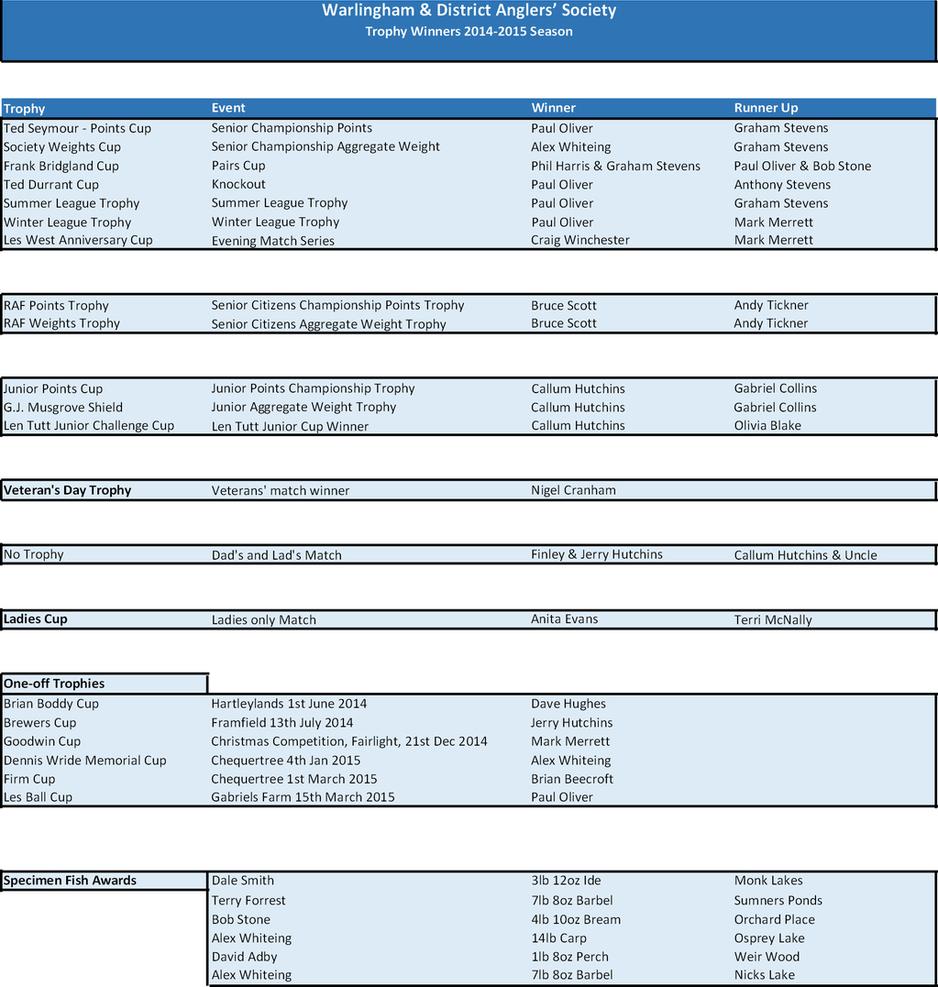 Finally, all the results for the last season have been compiled. Below is a list of all the Trophy Winners. Full Tables

The Blue team faced a daunting three-way tie against Dorking  and Cheam Social. Dorking chose often moody home venue of Milton Lake at Old Bury Hill and did a great job in organising the match. It proved to be a really excellent match, close and hard fought, but fished in a great spirit with some good weights posted.

Come the end of the match, the runners all agreed it was too close to call and so it turned out. Remarkably, all three teams finished with 12 points. Cheam and Dorking posted 3 section wins and 3 section lasts each. The WDAS Blues showed consistency with all team 6 members posting 2nd's in section. Aggregate weights too were close, WDAS 143lb 9oz, Cheam 135lb 10oz 8dr & Dorking 128lb 15oz 8dr.

Nobby Whiteing produced our best weight on the day with 35lb 4oz (3rd overall individually) but all of the team did well in posting at least double-figures.

After some head-scratching, all teams agreed that WDAS must have triumphed on the day, but we reckoned without the dogma of the Angling Times. "Rules is Rules" is their stance, electing to stick by the rules that have been unchanged since 1999 where section-win countback be used first, then aggregate weight in the event of a points tie. At first glance, some might say "fair enough" until you realise that these rules were drafted for competitions with many more teams in a round and larger numbers of anglers in each. With the organisers having reduced the team sizes to 6 anglers this year, it is now mathematically impossible to get a tie on points without also having a tie in the number of section wins, so using section-win countback cannot produce a result. It therefore always falls back to aggregate weight.

Despite the fact that if this had been the usual two-way tie against either Dorking or Cheam individually, WDAS would have been the winners of the match, WDAS end up being relegated to last place. More than odd for the most consistent team on the day.

We have lodged a formal appeal in the basis that the change in format this year has resulted in an unforeseen outcome, but the Angling Times has been close to rude in their dismissal of any argument. Frankly, this is a fiasco and if such a result occurs again in the latter stages, then it will fundamentally undermine the competition. We find it hard to believe that Angling Times are failing to recognise this.

The Red team chose Woodpeckers as their home venue against Apollo Godalming, but things did not really go to plan. The hoped-for carp failed to show in any numbers, playing into the hands of Apollo who's team plan seemed to target the silver fish. Congratulations to John Gibbons who managed to post top weight on the day of 23lb 12oz, but it registered the Red's only section win.

With weights low, the sections were close, but Apollo ran out clear winners in the end by 7 points to 11. Good luck to Apollo in the next round. 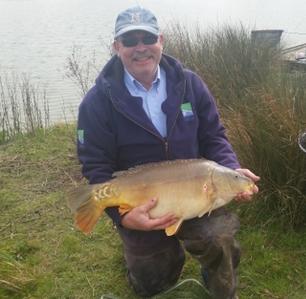 BB in the News again - for the right reasons....

After taking plenty of stick over the Winter of 2014/15 for his performances in the club matches, it seems the Spring has awoken Brian Beacroft from hibernation. Not only did he win the club match at Chequertree in March, he has now also won a mid-week special match held at Sumners Ponds on 10th April with 140lb. Remarkably, this included a trio of carp for 50lb including a personal best of 21lb 4oz!

Could Brian be the man to watch for the coming season??

The bad news is that the Blue team have draw a three-way tie vs Dorking and vs Cheam Social. Dorking have the home draw and get to choose the venue.

The Red team have been drawn against Apollo Godalming but have the home advantage and so need to select a venue.

Practice sessions will be arranged, following which the final teams will be selected from each squad for each round.

The matches this year are for smaller teams of 6 so W&DAS have entered two squads below. The first round qualifiers will be held on the weekend of 4th-5th April 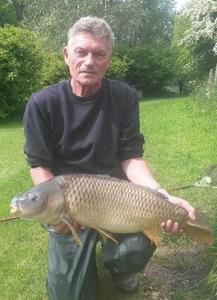 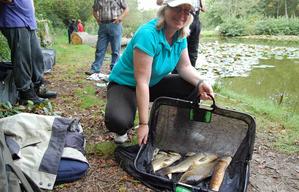 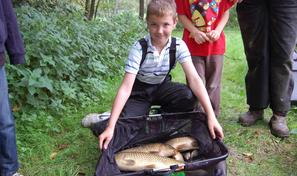 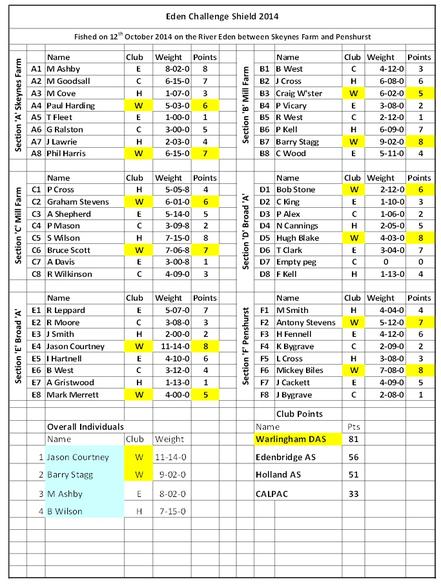 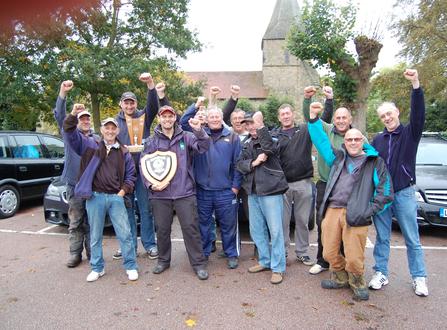