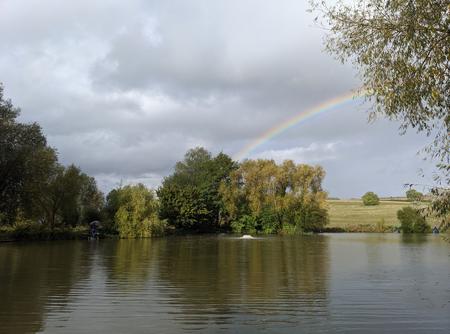 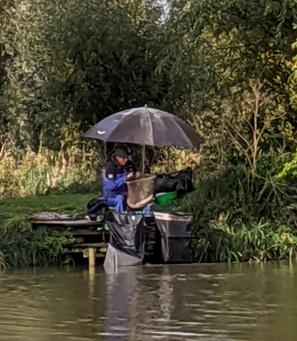 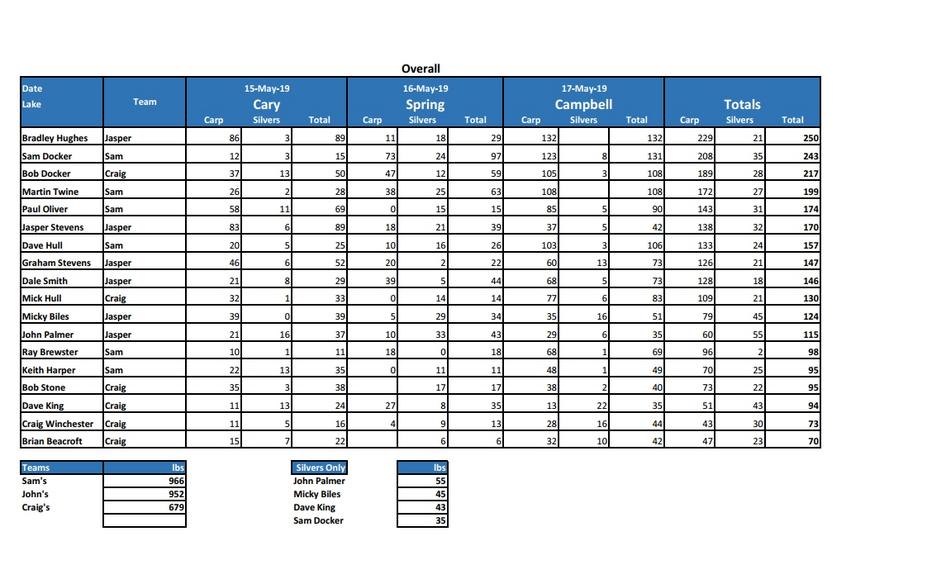 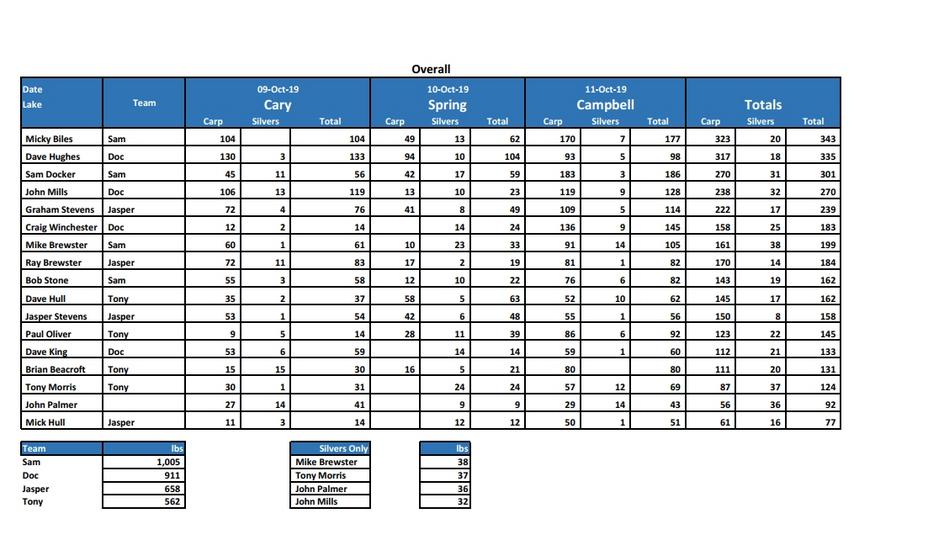 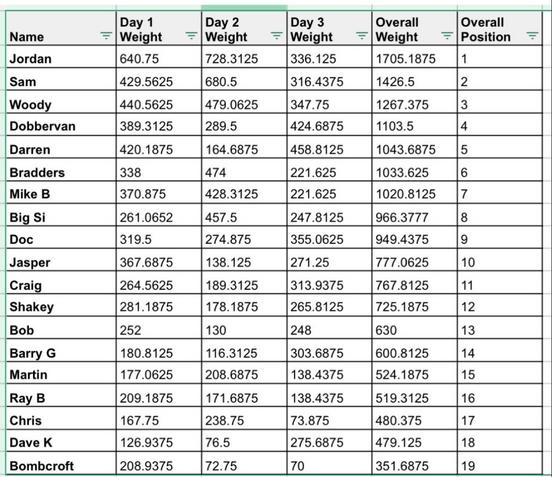 The full results are below and no, there is not a typo. Micky Biles fished a flawless three days to run out overall winner, taking some very big scalps in the process. That is the thing about match fishing, it can be a great leveller and humbling experience. The right peg on the day can put anyone in with a chance, although you still have to get them out. Things usually level out over a three day contest, so to maintain the form to the end was a truly remarkable feat. Very well done Micky!

As if truly blessed, he returned home on the Friday, ready for the Eden Challenge on the Sunday (a 36 peg match) and went on to win that too! I hope he did the lottery that week......

With the increasing popularity of the road trips, Todber was selected as a way of accommodating more people. Originally having 24 down for the cancelled May trip, for numerous reasons, only 14 were actually able to make this one. It was a shame as given his love for these trips, it had been decided to make the event in memory of Bobby Stone who died from Covid in April this year.  A fantastic trophy was secured for the winning team and despite his current health issues, Micky Biles was determined to attend.

The venue turned out to be delightful with a fantastic shop and chuck wagon, fabulously maintained lakes and grounds where you could drive to most pegs. A mixed blessing was, it seemed a hugely fair venue with literally thousands of eager carp in most pegs. Initially, it was assumed they were mostly stockies in the 1lb to 5lb range, but there were a number of double figure carp caught, with our esteemed specimen hunters, Brian Beacroft and Dave King both recording fish around 20lb.

We were able to fish three lakes overall, with half on Homeground and Ash Lakes on the first two days and all together on Hillview for the final day. It made for a really interesting challenge, although not perhaps for the purists given how prolific the fishing is.

Sadly, Micky struggled on the first day and a difficult night, so had to pull out with his driver Barry Stagg. Such a shame but entirely understandable how awful it must be to have one eye stuck open. Get well soon Micky!

As you will see from the results below, the weights were just incredible. All remaining 12 had at least one 100lb match weight and eight anglers broke the 100lb barrier every day! Over two and a half ton of fish caught in just three days.

Well done to Dave Hughes for coming out a clear winner and to Tony, Mike and Craig for their placings. Congratulations also to Dave, Graham and Paul for their team effort and winning the Bobby Stone Team Memorial Cup for the first time.

Get well soon Micky and let's hope you'll be back for our next visit in May and that all the Covid restrictions will be  distant memory.....

Once again we found ourselves at the beautiful Viaduct fishery for another great three days. For the first time, we actually had some rain to contend with, but it didn't spoil the enjoyment too much.

There was a full house of 18 again, with the usual format of aggregate total weight over the three days, with a separate aggregate silvers pool. This time the team challenge was three teams of six, ably led by former stars at the venue, Sam, Doc & Gary.

Day 1 on Cary was a bit of a challenge as usual. Whilst the weights look OK, with the average size of a carp around 10lb, it does not mean lots of fish! Paul Oliver drew the peg beyond the spit which does have a decent history and managed to win his first match here fishing bomb and pellet towards the top of the spit and pole with pellet or corn in the margins to take a dozen carp and a few silvers for 118lb, some way ahead of the Doc (you don't say that very often) on 85lb and Tony Morris 51lb.

Day 2 on Spring was the usual draw lottery. Although there are plenty of decent pegs, there are also a lot that can be hard. As usual, it was the island pegs, particularly the ones on the far side which produced best. Bob Docker gave a masterclass of long distance casting, by putting a small cage feeder under the willows at about 50 yards range where he caught a steady succession of carp and skimmers for a creditable 92lb, beating number one son Sam into 2nd place on 80lb from under the jungle of trees at the bottom end. Dave King made a very welcome visit to the frame in 3rd place by fishing "Dave's way". He fished a waggler up the inside margin, virtually under his rod tip with corn and micros to take some decent carp and silvers for 66lb from the top end peg on the far side. Nice one Dave!

Going into Day 3 and it was all to play for. There was only 20lb or so between the top few in the individual contest and just 50lb between the teams. How things can change.....

When the Doc drew favoured peg 123 and Tony Morris 119 opposite and the two top end pegs on the lake, it was set to be a Clash of the Titans. Both fished similarly with a small feeder chucked to the unfished top bank, meat up against the marginal reeds and paste on the short pole line and each option seemed to produce fish regularly. Come the weigh-in and it looked close but it was the Doc who took the honours with 186lb and Tony on 170lb. Paul Oliver was a distant 3rd on 104lb and consequently overtaken by the Doc for top honours overall. That big weight also pushed Tony up to overall 3rd after a quiet first two days with Sam relegated to 4th overall after only drawing one flyer in three days.

With both Tony and Doc in the same team, they also went from last to first for the team contest just to top up their bank balances still further.

Thanks to a great 2nd day bag of 35lb of skimmers, Mick Hull took the Silvers prize. Sam's struggle to find enough carp saw him accidentally come 2nd in the silvers with Jasper 3rd and Keith Harper 4th.

Thanks as always to JP for organising such a great trip. Pity he can't do anything about the Brewers Fayre at the hotel, which just goes from bad to worse. 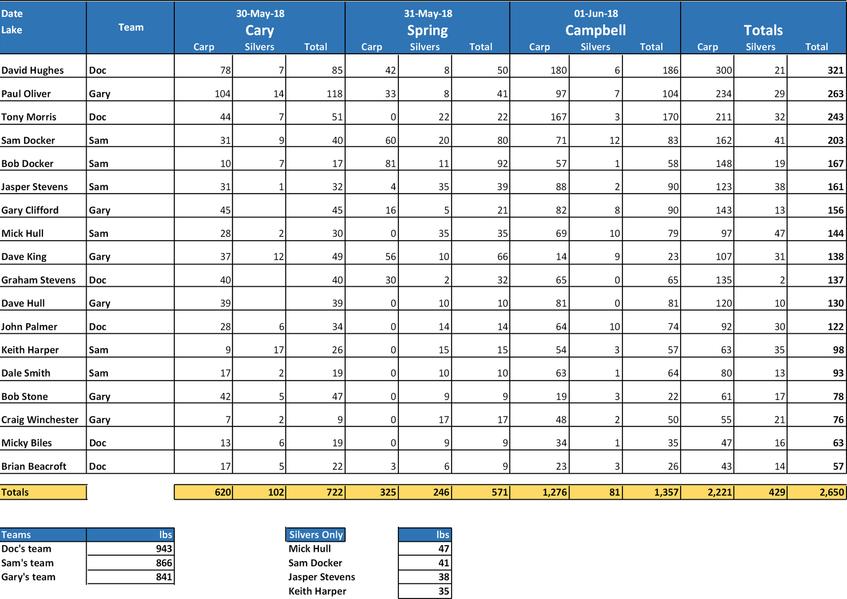 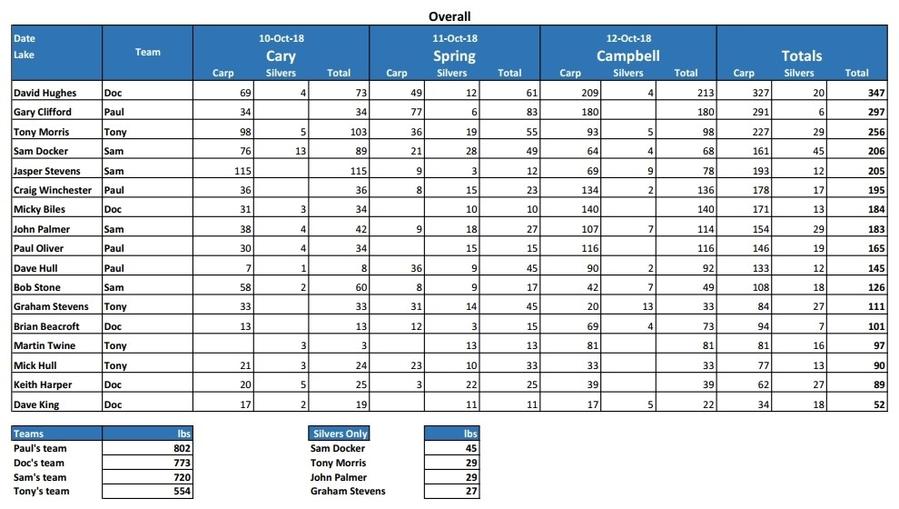 19 members signed up for this quite extra-ordinary fish-fest. Jordan Briant lead the way from day one with his extraordinary 728lb 6oz weight on day 1 and weights nearly doubling those of the already prolific spring event. There is little more to add except showing the full results below.

Despite being a one-horse race in terms of the competition, Todber is a really enjoyable trip. It is such a well looked after venue with a great on-site tackle shop and the best food van to be found anywhere. So much so, it even tempts Dale Smith to make the trip from his villa in southern Spain to fish, bringing the attendance up to 17.

For this trip, we were back to the ideal format of half the field being on either Ash or Homeground for days 1 & 2, with everyone fishing Hillview on the last day. Probably the banker method here now, is to fish up in the water, which proved decisive for its best proponents, Sam, Josh & Doc. However, as Brian Beacroft has proved more than once lately, feeder can still prove very productive as can paste which Martin Woodington showed on day 3. There are so many fish, any method will catch, but it is just a case of working out which will catch fastest.

Finally, it take a huge effort to put these trips together so enormous thanks go to Sam for organising this one so smoothly, particularly given his very busy schedule of both work and fishing.

When the planets align....

Every now and again, you hit a venue at exactly the right time - this was one of those.

Weather was mild, overcast and dry every day with nothing but a small odd ripple to disturb the surface. Absolutely perfect fishing conditions, perhaps with the fish sensing the onset of winter and keen to fatten up before it arrives.

Opinions vary as to whether this is proper fishing or not, but every now and again, it is brilliant to get a shot in the arm with bulging nets and big fit fish and the constant banter and abuse just keeps you smiling.

Previously, we kept the largest lake (Hillview) to the last day, but due to the needs of a local open and we were asked to swap around and all fished it on Day 1 where the die was cast. Sam Docker caught from the off on the 2 + 2 line with pellet, followed by more up in the water and finished with a constant succession of real lumps from the margins on corn over groundbait, putting down a real marker with 418lb. He didn't have it all his own way however, as young Darren Habgood and much older Martin Woodington pushed him all the way.

On day 2, Woody pushed Sam down to 2nd on Ash lake, whilst Darren again fished well to win Homeground, just holding off a determined charge from the oldest angler Keith Harper.

The final day was even closer, with Woody and Sam fish for fish throughout, with just 3oz separating them around an incredible 429lb each on Homeground. it was similar on Ash with a brilliant achievement from old Keith getting the better of young Darren by 11lb with a net of right lumps totalling 292lb.

Perhaps inevitably, Sam took the overall individual honours with an astonishing 1,170lb over 3 days. Woody fished brilliantly for 2nd, 100lb behind, with the young guns Darren and Mr Consistent, Josh Donovan taking the other placings.

For the teams, which is what this is all about, it was Darren's team including Woody, Jasper, Martin & Bi Si that took the prize.

Many broke their personal best records, more than once on the trip and every angler managed more than 100lb on every day. Just extraordinary weights and over 9,500lb in total.

Thanks go to Sam from everyone for putting in the organisation of this one, which can be very hard work!